Pregnancy in any species is often a critical, energetically demanding time.

Females require adequate quantity and quality food intake to support their developing offspring. The Steller sea lion, the largest of the otariids, is no exception. In this species, females nurse their offspring for approximately 1 year, meaning at any given time outside of the breeding season a female is likely supporting a developing fetus and also nursing a dependent offspring from that summer. That is a lot of resources!

But why do we care about the food cravings of pregnant sea lions? Low fecundity (birth rates) is thought to be a contributing factor to the failure of Steller sea lion populations in the 1970s-80s, and may still be limiting their ability to recover to pre-decline numbers through parts of its range. We know that disruptions in foraging activities and success can have direct consequences to reproductive success and ultimately impact population trends, but unfortunately, little is known about the energetic requirements of female Steller sea lions during this critical period.

Energetics and how we measure it

So how do scientists measure the energetic requirements of a pregnant Steller sea lion? Or in other terms…how much food (energy) does a pregnant female need to take in and how much is expelled throughout the gestation and lactation period?

However to measure this, routine access to a pregnant individual throughout the gestation cycle is needed. While sea lions are fairly visible and accessible during the summer season, during the winter and active gestation, rough seas and freezing temperatures limit access to haul-outs and thus constrain research activities year round. Luckily, this is a question the ASLC is uniquely positioned to assist in answering. Therefore, beginning in 2016, the Alaska SeaLife Center Marine Mammal Research team joined forces with Dr. Rosen, a renowned marine mammal physiologist out of the University of British Columbia to investigate these questions.

Step 1: Through a cooperative relationship between trainer and Steller sea lions, the sea lion voluntarily enters the metabolic chamber.

Step 2: We shut the tent and begin drawing air through the chamber and into our gas analyzers. The analyzers tell us what the percentage of oxygen is inside the metabolic tent.

*Don’t worry, the animals can breathe with ease. The tent is not airtight, but similar to you closing a tent for camping.* 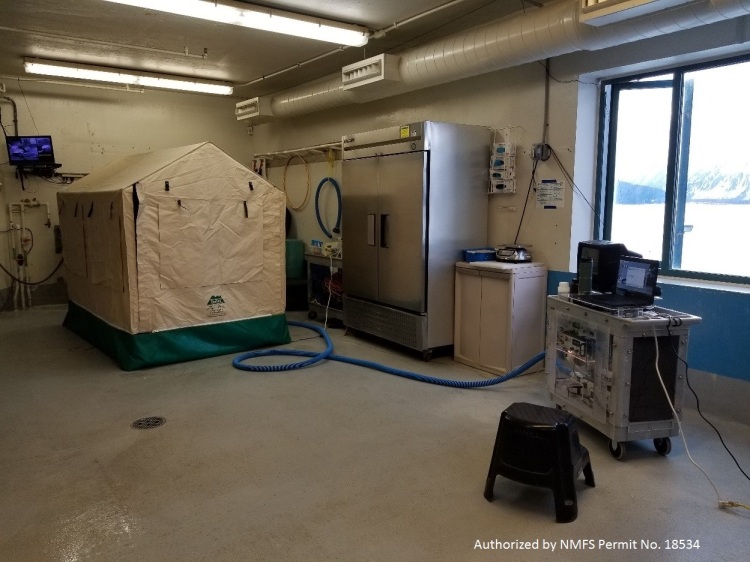 Step 3: Relax… this is the energetics of rest after all!

Step 4: Rinse and Repeat. We replicate this process over multiple pregnancies, lactation periods and individual females to assess the energetic requirements of pregnancy, simultaneous pregnancy and lactation, and non-pregnant adult females.

All activities and photographs are taken under National Marine Fisheries Service Permits #18534 and #14334.

One thought on “Just Relax and Breathe Normally”